The following links will help to identify problems with your writing and improve your communication with your audience.

How to think like a mathematician – Chapters 3 & 4
Kevin Houston

Writing mathematics (these videos are linked to the content in the two chapters above)
Watch part 1
Watch part 2
Check your library or online for a copy of the full book.

The term ‘significant figures’ is used to describe the digits of numbers that have been measured. The digits communicate important information about the precision of a measurement, regardless of the units. Being able to recognise the number of significant figures is particularly important when you use measurements in calculations or unit conversions.

For example, when using measurements in calculations your final answer will only be as accurate as the LEAST PRECISE measurement. Being able to identify the significant figures in your measurements will ensure you are able to communicate the correct level of precision.

For every measurement, whether performed by you or a machine, there is estimation involved—you will never be able to measure the EXACT length, weight, or temperature of anything. We can improve the precision of our equipment, but any measurement will only be as precise as the equipment being used to make the measurement (e.g. measuring a distance to the nearest metre, centimetre, or millimetre).

Usually there will be a number (or numbers) that you are certain of plus one digit at the end that is an estimate.

If you write that the length indicated below is 13.2 cm (measured to 3 significant figures), you are saying that you are certain the length is at least 13 cm but you have estimated to the nearest millimetre. The actual length could be anywhere in between 13.1 cm and 13.3 cm.

The following rules will help you to recognise which numbers are classed as significant figures.

Digits that are significant

1. All non-zero digits are significant.
Example
8.1 g has 2 significant figures.

3. Trailing zeros to the right of a decimal point are significant.
Example
0.2590 kg has 4 significant figures. This could be written as 259.0 g.

4. Leading zeros to the left of the first non-zero digit are not significant.
Example
0.056 km has 2 significant figures. This could be written as 56 m.

6. Exact numbers have infinite significant figures and they will not limit the accuracy of your calculation.
Exact numbers include counts (e.g. 10 apples) and defined numbers (e.g. 100 centimetres in a metre or the speed of light – 299 792 458 m/s). These numbers are not classed as measurements and significant figures do not need to be considered.

When adding or subtracting numbers, your final answer will only be as precise as the LEAST precise value. Instead of counting the number of significant figures, you need to focus on the number of decimal places.

When multiplying or dividing numbers, you need to focus on the number of significant figures rather than the decimal places.

*Remember, the 10 mm in this calculation is an exact number and should not be used to determine the significant figures. See rule 6 above.

You take a measurement of the air temperature using a thermometer that measures degrees Fahrenheit. You record a reading of 87 °F. Convert this measurement to degrees Celsius.

This answer is incorrect because it indicates a higher level of precision than what was recorded in the initial measurement.

The correct answer should be rounded off to include 2 significant figures.

Therefore, the correct answer is 31 °C.

The International System of Units provides certainty for units of measurement.

Download the SI units brochure for more information on base units, derived units, and prefixes.

Download the units style guide for more information on how to use and write metric units.

Scientific notation is a way to display very large and very small numbers in a concise way. From a communication perspective, scientific notation allows you to record measurements in a consistent way for all units and present calculations neatly.

Using scientific notation can reduce the confusion around identifying the significant figures of a number, particularly when you’re converting to different units. 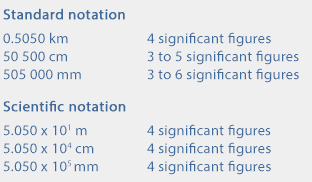 When rounding off figures in large datasets or spreadsheets, you may need to use the odd-even rule to avoid rounding errors.

If the number to be dropped is 5 and is followed by no digits or only by zeros, apply the odd-even rule.

If the digit before the 5 is even, drop the 5 and any trailing zeros.

If the digit before the five is odd, increase the digit by 1 and drop the 5 and any trailing zeros.

If you need to write down answers from your calculator at intermediate steps or record figures in a spreadsheet, you can include “guard digits” to avoid losing information along the way. Guard digits are simply extra digits that you keep at the end of a number to reduce errors caused by rounding off.

Full calculation performed on a calculator:

Intermediate steps rounded to include up to 2 guard digits:

If you have any questions or comments about CLIPS, we’d love to hear from you.